Expanding the definition of weatherization

We worked with Baltimore-based DAP to change conversations around sustainability and weatherization in the home. Through a series of home interviews we recognized some core problems with how people view weatherization. We used these user insights to develop innovation opportunities for Heather Sarkissian, DAP’s Corporate Innovation Manager.

Home interviews to better understand the current state of weatherization

Altogether, our MA/MBA cohort spoke with 10 individuals over eight separate hour-long interviews. We gathered to share information from the various perspectives afterward to make sure we were designing solutions for the greater public. Though we were not all at each interview, we began to see the bigger picture. Opportunities emerged from individuals’ stories and we were able to parse out some key findings:

Buying Weatherization Supplies is not fun

Spending hours at Home Depot in front of seemingly indistinguishable caulking and weatherproofing materials isn’t incredibly fun for most people. The products are utilitarian and complicated. Unless a shopper is a regular weatherproofer, it’s a tough situation to go into with a great deal of confidence.

Products are used for more than just weatherization

Some of the people we interviewed were students at MICA. They had never owned a home, but were familiar with DAP products from sculpture courses and friendly pranks – all they wanted was to cover a classmate’s door in weatherizing foam! We were inspired by the St. Louis City Museum and Red Bull events to imagine community-centered, artistic events utilizing DAP materials. These events would create a new market for DAP, and give the community an opportunity to interact with the product in an unexpected and playful way.

Experiencing weatherization materials in an unexpected setting would familiarize users with the breadth of available supplies, and give these users hands on experience using the otherwise unfamiliar tools.

Heather responded positively to the idea of an event-based introduction to DAP products, noting this idea could be executed quickly and adjust to varying consumer needs.

People are reactive to weatherization needs

It is rare to find someone who proactively weatherizes his or her home for the changing seasons. It is often after it becomes blisteringly cold out that people begin to think of caulking drafty gaps – at which point the integrity of the product is compromised by the frigid temperature.

Though we explored many ideas through rapid prototyping, we ended up spending the majority of our time ideating concepts to move weatherization from reactive to proactive. We explored this through biomimicry, as nature has developed sustainable methods of ‘weatherization’ for years and years. Desert-dwelling animals like jackrabbits have evolved to adapt to drastically swinging temperatures on a daily basis. The large ears of the jackrabbit are used to help the animal keep cool, radiating heat via an extensive network of blood vessels.

Taking cues from from jackrabbits, lizards, and desert plants, we began to imagine how to use modern technology to create housing that would self-regulate with the changing temperatures. 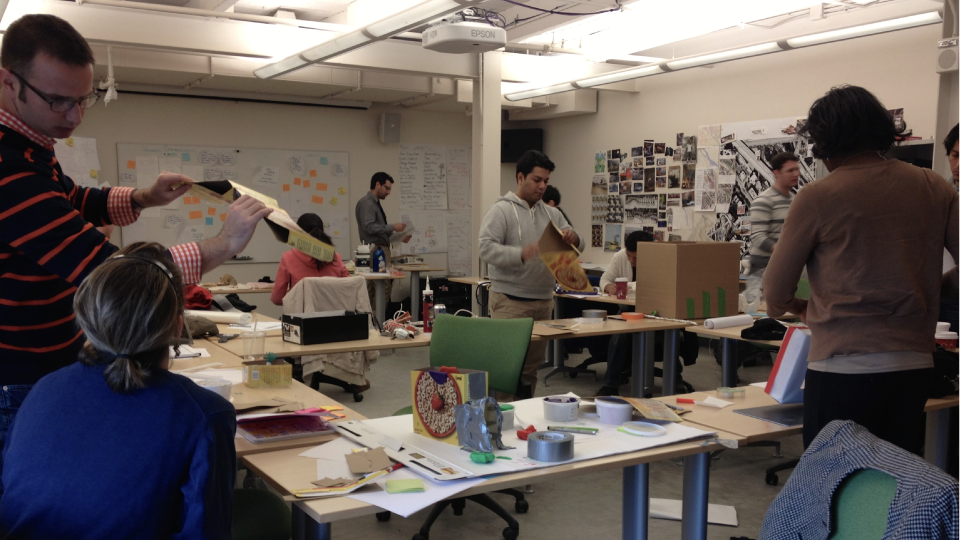 Our concepts ranged from feasible to extremely far-fetched. We imagined liquid insulation that would act like the blood vessels in a jackrabbits ears, and found precedence in radiant floor heating. We studied fish gills and plate tectonics to imagine how slight changes could make a weatherproof and breathable living environment (depending on the weather outside). We imagined a kind of home that would be well-insulated in an extreme summer and winter, while allowing permeation in the more temperate seasons – and tied this concept to the existing appearance of siding to allow for easy adoption.